Some of our younger readers would unlikely remember some of the 70’s, 80’s and early 90’s snooker players that once graced our television sets, but today we have decided to talk about the legend that is “big” Bill Werbeniuk.

Big Bill Werbeniuk was a Canadian born snooker and pool player born in the late 1940’s in the city of Winnipeg. Famous for his pool playing abilities, he soon hooked up with fellow countryman Cliff Thorburn and traveled around America playing money matches, gaining a good reputation for himself. After winning some big pool tournaments in America, Big bill then traveled over to the UK to play professional snooker to further his career. 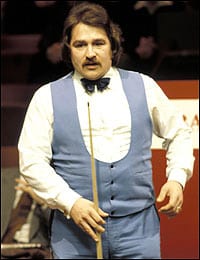 Most people would have recognized Bill mostly because of his large stature and large alcohol consumption he did whilst playing. He maintained that his high level of drinking was due to the fact he suffered from being nervous during matches. Bill would always drink six pints of larger before a match began and then one pint during each frame. In total, he would drink between 40 and 50 pints of larger each day in order for him to be able to play snooker. Bill once said “i am unable to play snooker to any standard without drinking”.

Bill Werbeniuk once drank 76 cans of larger during a match with John Spencer in Australia during the 1970’s. During another match, he drank a staggering 43 pints of larger, and after the match, went to the bar for more.

Because of big Bill Werbeniuk heavy alcohol consumption, his heart naturally suffered as a consequence. This led him to start taking a beta blocker drug called propranolol which reduces the heart rate, blood pressure and abnormal rhythms.  Unfortunately for Bill, this would prove to be his demise in professional snooker.

His best snooker achievements was reaching the world snooker championships quarter finals in 1978, 1979 and 1981 and the semi finals of the UK championships. His only final was the Lada classic where he was beaten by Steve Davis. The year 1983 was his best year in terms of his snooker career, reaching to No.8 in the world.

The end of his snooker career came when the Olympics anti doping committee decided that propranolol was a performance enhancing drug and he could no longer compete in professional snooker because world snooker followed the Olympic guidelines. His last professional match was in 1990.

Big Bill did however return to Canada to continue playing pool where propranolol was not banned and continued to do so until his death at the age of 56 in 2003 due to heart failure.

Bill remains an iconic figure in snooker, as his drinking habits, cheery personality and exciting performances still live on in the memories of the fans who enjoyed watching him. Looing back on the 70’s and 80’s snooker, Big Bill was one of the most recognizable players that stood out from the crowd.

These days it would be unusual to see a player drinking anything other than water during a match but back in that era of the game, it was quite common that players consumed alcohol and smoked cigarettes regularly.  The times certainly have changed in snooker.

How To Choose A Snooker Cue

Custom pool tables: A great alternative to a snooker table